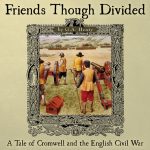 It’s the time of the English Civil War in 1642. Harry Furness is a Cavalier fighting for the King; but his friend, Herbert Rippinghall, sides with the Roundheads in opposition! Oliver Cromwell leads the rebels who are aligned against the King and his admittedly tyrannical rule, but he ends up imposing his own. Most of this tale follows Harry Furness and the campaigns which … END_OF_DOCUMENT_TOKEN_TO_BE_REPLACED

Stand Up for the Bible’s Inerrancy!

Thank you for stopping by!

In order to fulfill our mission to promote and support the Deuteronomy 6:6-7 lifestyle in the modern Christian family, we strive to produce content, offer material, and recommend resources that will help you hide the words of God in your heart and also “teach them diligently unto thy children.” We hope that you find this site to be edifying and useful to you; and we pray that with the blessing of the Lord, it may serve as a help to you in your own Family Reformation journey!

Blessings to you and your family,